Question:  What are the rules governing employee HSA rollovers and transfers?

Short Answer:  Within the restrictions imposed by the IRS (which depend on whether the distribution is a rollover or a transfer), employees can freely move their HSA assets to a new custodian at any time and for any reason.

General Rule: HSA Rollovers and Transfers are Not Subject to Taxation

Non-medical HSA distributions are subject to ordinary income taxes, plus a 20% additional tax for individuals under the age of 65.  However, these taxes do not apply to a HSA rollover or transfer.  Rollovers and transfers also do not apply to the annual HSA contribution limit.

This means that moving HSA funds to another HSA bank does not cause any adverse tax consequences, as long as the HSA holder follows the applicable IRS requirements.  The HSA rollover and transfer rules are similar to those that apply to an IRA.

Although employers typically require that employees establish an HSA with the employer’s designated HSA custodian in order to make or receive HSA contributions through payroll, the employee’s HSA is not an employer-sponsored plan and is therefore not subject to ERISA.  While it is theoretically possible for an employer to make an HSA subject to ERISA, it is extraordinarily rare because the compliance burden would generally be insurmountable.

The result is that employees have complete ownership and control of the HSA as their own personal account.  As one aspect of this personal and non-ERISA HSA ownership, DOL guidance prohibits employers from limiting the ability of employees to roll over or transfer their funds to another HSA.

Summary: Employers generally do not permit employer or employee HSA contributions through payroll outside of the employer’s chosen HSA bank.  However, employees can freely move any such HSA assets in those accounts to any other HSA maintained by any other HSA custodian via a rollover or transfer.

An HSA rollover occurs where the employee receives a distribution from the original HSA account and then re-deposits the assets in a second HSA established by the employee with a different custodian.

There are two main rules associated with HSA rollovers:

An HSA transfer occurs where the original HSA custodian directly moves the HSA funds to the second HSA established by the employee with a different custodian.  The employee has no access to the assets in the transfer process and therefore is not responsible for completing the process within a set timeframe.  HSA transfers are also frequently referred to as a “direct transfer” or a “trustee-to-trustee transfer”.

Outside the practical limitations described below, there are no limits on the number of HSA transfers an employee can complete.  The once-per-year rule for HSA rollovers does not apply to an HSA transfer because the employee does not have access to the funds in the process.

Other Forms of HSA Transfers: Qualified HSA Funding Distributions (QHFDs) from an IRA

HSA eligible individuals are permitted to make a tax-free transfer from an IRA to an HSA once-per-lifetime.  The IRA owner and HSA owner must be the same person, and the process must be handled via a transfer directly from the IRA custodian to the HSA custodian (i.e., rollovers are not permitted).  These IRA to HSA transfers are referred to as “Qualified HSA Funding Distributions” or “QHFDs”.

A special testing period requires the individual making a QHFD to maintain HSA eligibility for 12 months following the transfer.  The QHFD amount will become taxable for individuals who fail to remain HSA-eligible during the 12-month QHFD testing period.

Other Forms of HSA Transfers: Qualified HSA Distributions (QHDs) from a Health FSA or HRA (No Longer Permitted)

The Tax Relief and Health Care Act of 2006 (TRHCA) permitted a special form of HSA transfers referred to as “Qualified HSA Distributions” or “QHDs” from the date of its enactment (December 20, 2006) through the end of 2011.

The QHD rules permitted transfers from the employee’s health FSA or HRA to the employee’s HSA.  For a number of reasons, including the complexity of the rules surrounding the process, employers seldom offered QHDs as an option during the limited timeframe in which they were permitted.

For more information on everything HSA, see our ABD 2020 Go All the Way With HSA Guide.

An amount is described in this paragraph as a rollover contribution if it meets the requirements of subparagraphs (A) and (B).

(B)  Limitation. This paragraph shall not apply to any amount described in subparagraph (A) received by an individual from a health savings account if, at any time during the 1-year period ending on the day of such receipt, such individual received any other amount described in subparagraph (A) from a health savings account which was not includible in the individual’s gross income because of the application of this paragraph.

Q-55. How frequently may an account beneficiary make rollover contributions to an HSA under section 223(f)(5)?

A-55. An account beneficiary may make only one rollover contribution to an HSA during a 1-year period. In addition, to qualify as a rollover, any amount paid or distributed from an HSA to an account beneficiary must be paid over to an HSA within 60 days after the date of receipt of the payment or distribution. But see Q&A 78 regarding trustee’s or custodian’s obligation to accept rollovers. See also Notice 2004-2, Q&A 23 for additional rules on rollovers.

Q-56. Are transfers of HSA amounts from one HSA trustee directly to another HSA trustee (trustee-to-trustee transfers), subject to the rollover restrictions?

Accordingly, we would not find that employer contributions to HSAs give rise to an ERISA-covered plan where the establishment of the HSAs is completely voluntary on the part of the employees and the employer does not: (i) limit the ability of eligible individuals to move their funds to another HSA beyond restrictions imposed by the Code; (ii) impose conditions on utilization of HSA funds beyond those permitted under the Code; (iii) make or influence the investment decisions with respect to funds contributed to an HSA; (iv) represent that the HSAs are an employee welfare benefit plan established or maintained by the employer; or (v) receive any payment or compensation in connection with an HSA.

In the absence of an employee’s affirmative consent, may an employer open an HSA for an employee and deposit employer funds into the HSA without violating the condition in the FAB that requires that the establishment of an HSA by an employee be “completely voluntary”?

Yes. The intended purpose of the “completely voluntary” condition in FAB 2004-01 is to ensure that any contributions an employee makes to an HSA, including salary reduction amounts, will be voluntary. HSA account holders have sole control and are exclusively responsible for expending HSA funds and generally may move the funds to another HSA or otherwise withdraw the funds. The fact that an employer unilaterally opens an HSA for an employee and deposits employer funds into the HSA does not divest the HSA accountholder of this control and responsibility and, therefore, would not give rise to an ERISA-covered plan so long as the conditions described in FAB 2004-01 are met.

Archer MSAs and other HSAs.

You must roll over the amount within 60 days after the date of receipt. You can make only one rollover contribution to an HSA during a 1-year period.

If you instruct the trustee of your HSA to transfer funds directly to the trustee of another of your HSAs, the transfer isn’t considered a rollover. There is no limit on the number of these transfers. Don’t include the amount transferred in income, deduct it as a contribution, nor include it as a distribution on Form 8889.

(i)  Maximum dollar limitation. The amount excluded from gross income by subparagraph (A) shall not exceed the excess of—

(I)  the annual limitation under section 223(b) computed on the basis of the type of coverage under the high deductible health plan covering the individual at the time of the qualified HSA funding distribution, over

(II)  in the case of a distribution described in clause (ii)(II) , the amount of the earlier qualified HSA funding distribution.

(I)  In general. Except as provided in subclause (II) , an individual may make an election under subparagraph (A) only for one qualified HSA funding distribution during the lifetime of the individual. Such an election, once made, shall be irrevocable.

The provision in the Act allowing qualified HSA distributions from health FSAs and HRAs is effective on or after December 20, 2006, and before January 1, 2012. 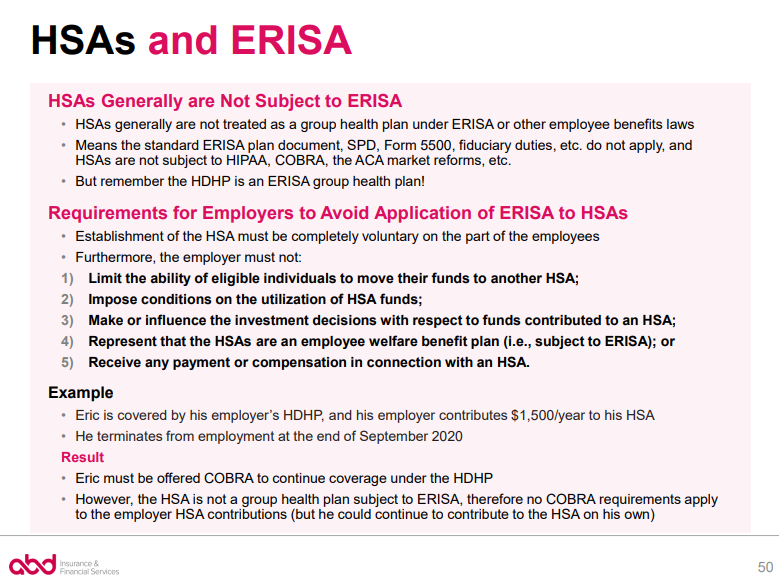 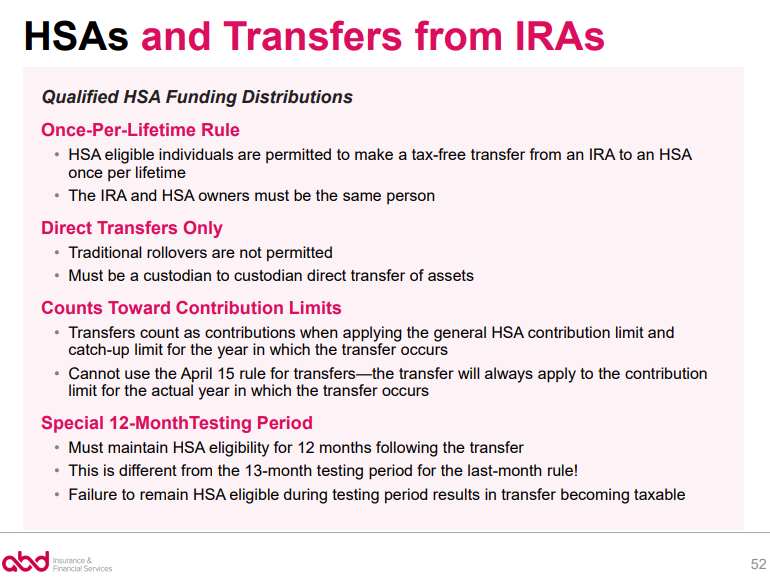