How COBRA and Medicare Interact for Retirees

Question:  What are the main considerations for retiring employees regarding how COBRA and Medicare interact?

Short Answer: There are four primary issues for Medicare-eligible employees to consider upon deciding if and when to elect COBRA after terminating employment.

Issue #1: Medicare Will Pay Primary (COBRA Coverage Can Assume Primary Medicare Payment Even If Not Enrolled)

In general, the Medicare Secondary Payer (MSP) rules require that the employer-sponsored group health plan always pay primary to Medicare for individuals in “current employment status.”  This means for any active employee or spouse (but not domestic partner), Medicare will pay secondary.

In the COBRA context where the MSP rules do not apply and Medicare is primary, the plan can assume the Medicare payment rate and pay only as secondary coverage for any individual who is eligible for COBRA.  This is true regardless of whether the individual is actually enrolled in Medicare.

For example, if an individual’s services would have been covered primary by Medicare if the participant were enrolled in Part B, the carrier can pay only the amount that a secondary plan would pay.  For individuals not enrolled in Part B, that leaves the amount that would have been paid by Part B as a coverage gap for which the participant is responsible.

Medicare-eligible retirees will never want to be in a position where they fail to enroll in Medicare while enrolled in COBRA under a plan that assumes the Medicare primary payment rate regardless of actual Medicare enrollment.

Issue #2: The Eight-Month Medicare Special Enrollment Period is Not Extended by COBRA Enrollment

Medicare-eligible employees are eligible for an eight-month Medicare special enrollment period upon retirement (or any termination of employment) that begins upon the earlier of:

Medicare-eligible employees who fail to enroll in Medicare during the eight-month special enrollment period can enroll in Part B only during the January 1 – March 31 General Enrollment Period for coverage effective as of the following July 1.

Issue #3: COBRA Does Not Qualify to Avoid Part B Late Enrollment Penalties

Retiring employees have eight months to sign up for Medicare Part B without a penalty.  That eight-month period to enroll in Part B applies regardless of whether the employee elects COBRA.

Retiring Medicare-eligible employees generally should not wait to enroll in Medicare Part B until they have exhausted (or no longer want) COBRA coverage.  Failure to enroll in Part B during the eight-month Medicare special enrollment period will result in:

Issue #4: Early Termination of COBRA Upon Enrollment in Medicare

COBRA can terminate early if the qualified beneficiary enrolls in Medicare after electing COBRA.

There are a few key points with this rule:

For more details, see our previous post: Early Termination of COBRA Upon Enrollment in Medicare.

Note that the Cal-COBRA rules are the same except for one major difference: Cal-COBRA provides that mere Medicare eligibility (as opposed to enrollment) will cut Cal-COBRA rights short.

(b) Medicare as secondary payer.

(i) In general. A group health plan—

(I) may not take into account that an individual (or the individual’s spouse) who is covered under the plan by virtue of the individual’s current employment status with an employer is entitled to benefits under this subchapter under section 426(a) of this title, and

Answer: For individuals who are entitled to Medicare on the basis of age or disability Medicare is the secondary payer due to the individual’s “current employment status.”  COBRA benefits are provided where the individual would otherwise lose coverage under the employer’s group health plan (GHP) because of certain “qualifying events.”  These include termination of employment (other than for gross misconduct) and reduction of hours of employment.  Since COBRA coverage is provided pursuant to the COBRA statute, rather than “by virtue of current employment status” Medicare is the primary payer for the working aged and disabled who are enrolled in the GHP as a result of COBRA coverage.

Moore’s reading, however, will not square with the text. Subsection 1162(2)(D)(i) does not provide that the employer is excused if the beneficiary “is” covered or “remains” covered on or after the date of the election. Nothing in § 1162(2)(D)(i) says anything about the hierarchy of policy obligations, or otherwise suggests that it might matter whether the coverage of another group health plan is primary. So far as this case is concerned, what is crucial is that § 1162(2)(D)(i) does not speak in terms of “coverage” that might exist or continue; it speaks in terms of an event, the event of “becoming covered.” This event is significant only if it occurs, and “first” occurs, at a time “after the date of the election.” It is undisputed that both before and after James Geissal elected COBRA continuation coverage he was continuously a beneficiary of TWA’s group health plan. Because he was thus covered before he made his COBRA election, and so did not “first become” covered under the TWA plan after the date of election, Moore could not cut off his COBRA coverage under the plain meaning of § 1162(2)(D)(i).

The continuation coverage requirements of this article do not apply to the following individuals:

Why would an employee not qualify to enroll in Cal-COBRA? 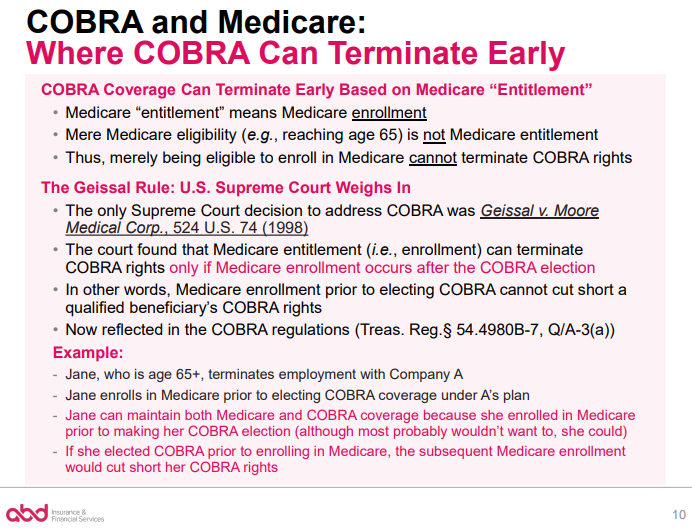 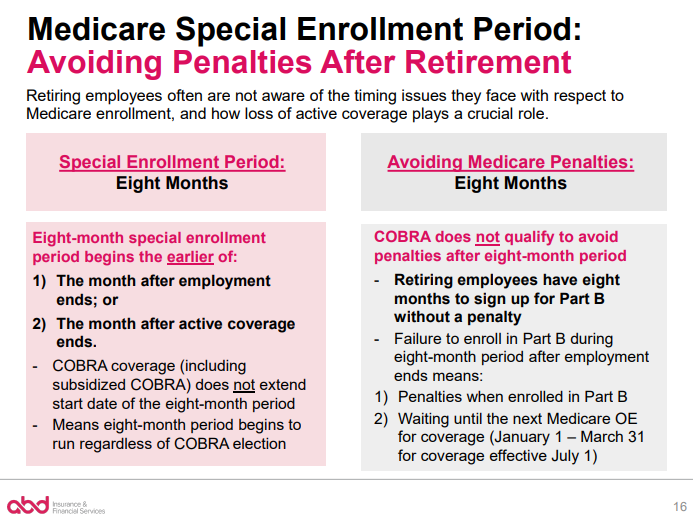 Brian Gilmore is the Lead Benefits Counsel at ABD. He assists clients on a wide variety of employee benefits compliance issues. The primary areas of his practice include ERISA, ACA, COBRA, HIPAA, Section 125 Cafeteria Plans, and 401(k) plans. Brian also presents regularly at trade events and in webinars on current hot topics in employee benefits law.