Question:  When is an HSA established?

Short Answer: The general rule is that an HSA is established when it is first funded, and individuals cannot take a tax-free distribution for medical expenses incurred prior to the HSA establishment date.

General HSA Establishment Rule: Ability to Incur Expenses That are Eligible for Tax-Free Medical Distributions Does Not Begin Until HSA is Funded

Individuals may take a qualified tax-free medical distribution from an HSA only for medical expenses incurred after the individual established the HSA.

State trust law determines when an HSA is considered “established.”  Most state laws require that a trust be funded to be established.  This means that in most cases an HSA is not established until a contribution is deposited.

– Aaron is hired November 15 by Cheeseheads, Inc. with date of hire coverage.

– Aaron did not establish an HSA previously.

– The first deposit into Aaron’s HSA is made by Cheeseheads, Inc. in December.

– Aaron’s HSA is established in December.

– Aaron cannot use the HSA to pay for his $250 deductible expenses on a tax-free basis because they were incurred prior to the December establishment of the HSA.

– Important Note: Aaron also is not HSA eligible (i.e., eligible to make or receive HSA contributions) in November because he was not covered by the HDHP as of the first day of the calendar month.

Special HSA Establishment Rule: Individuals Who Had an HSA in the Previous 18 Months

For individuals who previously had an HSA, there is a significant exception from the general rule that may permit individuals to take a tax-free medical distribution prior to the date the new HSA is funded.

– Aaron had an HSA previously that was established January 2016.

– Aaron distributed the last funds from that previous HSA on July 4, 2018.

– The first deposit into Aaron’s new HSA is made by Cheeseheads, Inc. in December 2019.

– Aaron can use the new HSA to pay for his $250 deductible expenses on a tax-free basis because they were incurred after the new HSA’s deemed establishment date in January 2016.

For more details on everything HSA, see our ABD 2020 Go All the Way With HSA Guide.

(A)  In general. The term “eligible individual” means, with respect to any month, any individual if—

(i)  such individual is covered under a high deductible health plan as of the 1st day of such month, and

(I)  which is not a high deductible health plan, and

(II)  which provides coverage for any benefit which is covered under the high deductible health plan.

Q-2. Who is eligible to establish an HSA?

A-2. An “eligible individual” can establish an HSA. An “eligible individual” means, with respect to any month, any individual who: (1) is covered under a high-deductible health plan (HDHP) on the first day of such month; (2) is not also covered by any other health plan that is not an HDHP (with certain exceptions for plans providing certain limited types of coverage); (3) is not enrolled in Medicare (generally, has not yet reached age 65); and (4) may not be claimed as a dependent on another person’s tax return.

Q-26. What are the “qualified medical expenses” that are eligible for tax-free distributions?

Q-41. On what date is an HSA established if the account beneficiary had previously established an HSA? 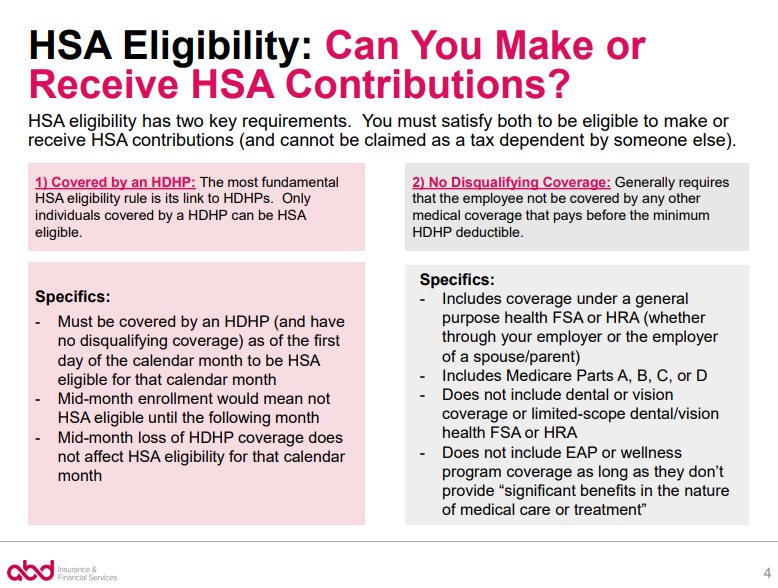 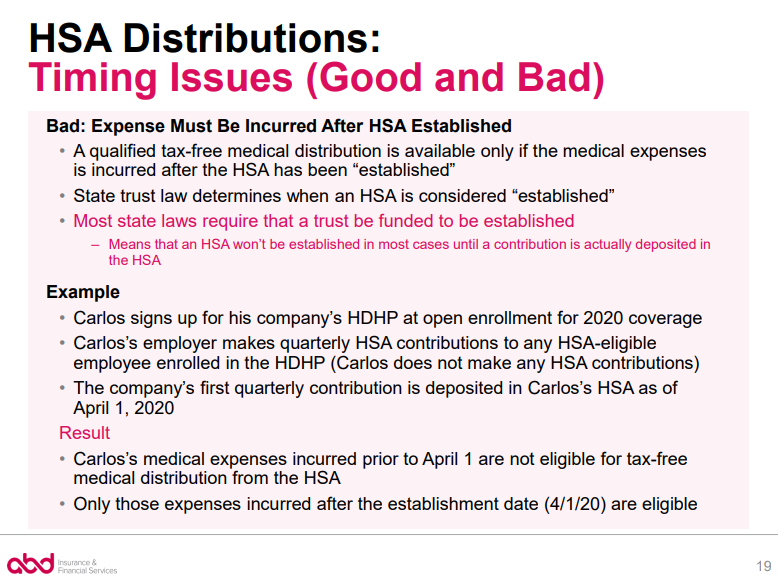 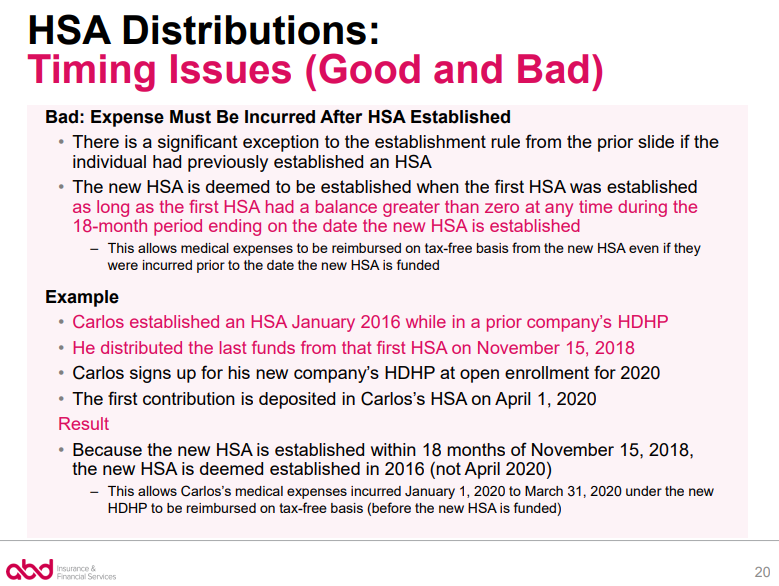