Determining an employee’s HSA contribution limit following a mid-year election can be tricky.

Question:  An employee was hired mid-September last year and enrolled in the HDHP coverage on date of hire. What is his 2016 HSA contribution limit?

The general rule is that the employee would have a proportional contribution limit based on the number of months of HSA eligibility in 2016. HSA eligibility is determined as of the first day of each calendar month. Even though the employee was enrolled in September, he was not HSA-eligible because he was not enrolled on the first day of the month.

This means that the employee was HSA-eligible for three months in 2016 (October, November, December).

We find that this rule often confuses employees—so here are three attempts at making sense of this tricky (but useful!) exception.

If you fail to remain an eligible individual during the testing period, other than because of death or becoming disabled, you will have to include in income the total contributions made to your HSA that would not have been made except for the last-month rule. You include this amount in your income in the year in which you fail to be an eligible individual. This amount is also subject to a 10% additional tax. The income and additional tax are calculated on Form 8889, Part III.

For mid-year HDHP enrollees, the last-month rule will allow HSA contributions up to the full statutory HSA limit even though the employee was not HSA eligible for the full year.

The Catch—In order to qualify for the last-month rule, the employee must:

In other words, there is a 13-month “testing period” that applies. You need to be eligible December 1 through the entire subsequent year to contribute the full HSA amount in the year in which you became HSA eligible.

For example: Let’s say employee Bob was a new hire on September 14, 2016. Bob enrolled in the company’s HDHP and become HSA-eligible as of October 1, 2016.

If Bob takes advantage of the last-month rule and fails to maintain HSA eligibility through the end of 2017, he will be subject to income taxes and a 10% additional tax on the amount of his excess contributions (9/12 of his contribution). 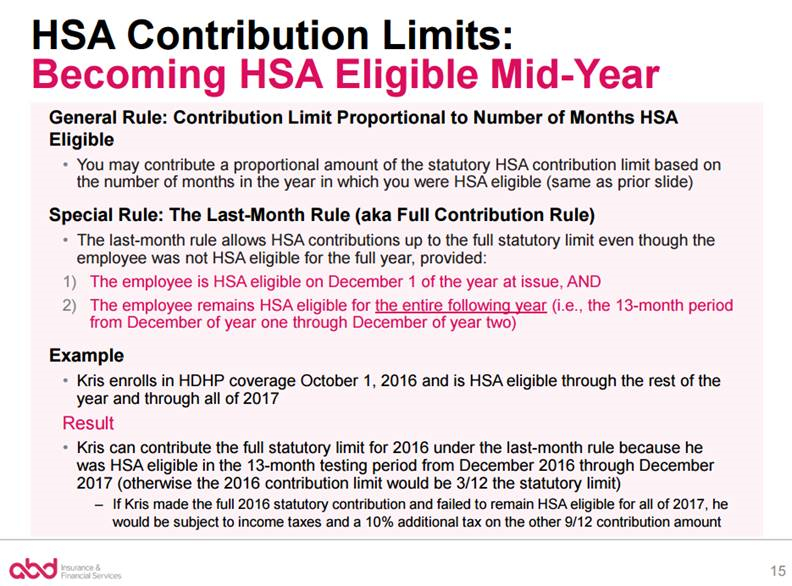