Question:   Do employees on FMLA leave and COBRA participants have the same open enrollment rights for the health plan as active employees?

As described in more detail below, both employees on FMLA leave and COBRA participants have the same open enrollment rights for the health plan as active employees.

During an FMLA leave, the employer must maintain the employee’s coverage under any group health plan on the same conditions as coverage would have been provided if the employee had been actively at work.

One aspect of this employer requirement to maintain group health coverage is that the employer must also provide employees on FMLA leave with the right to revoke or change elections under the same terms and conditions that apply to employees who are not on FMLA leave.

There are a few associated issues to be aware of:

ABD Office Hours: Health Benefits While on a Leave of Absence 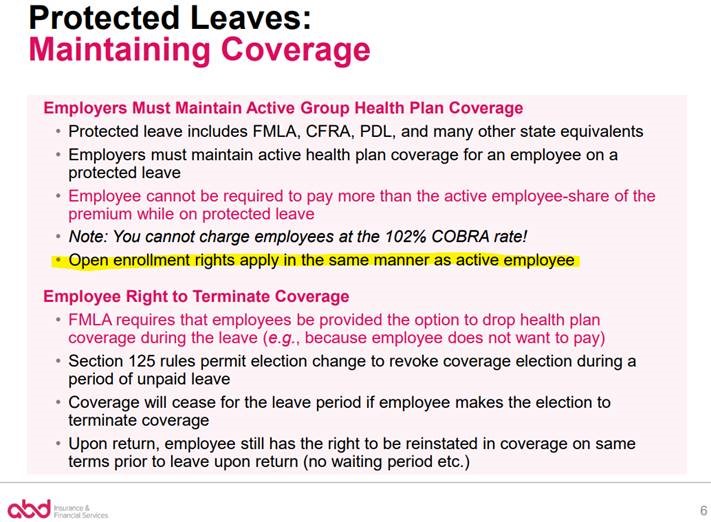 (a)  During any FMLA leave, an employer must maintain the employee’s coverage under any group health plan (as defined in the Internal Revenue Code of 1986 at 26 U.S.C. 5000(b)(1) on the same conditions as coverage would have been provided if the employee had been continuously employed during the entire leave period. All employers covered by FMLA, including public agencies, are subject to the Act’s requirements to maintain health coverage. The definition of group health plan is set forth in §825.102…

(e)  An employee may choose not to retain group health plan coverage during FMLA leave. However, when an employee returns from leave, the employee is entitled to be reinstated on the same terms as prior to taking the leave, including family or dependent coverages, without any qualifying period, physical examination, exclusion of pre-existing conditions, etc. See §825.212(c).

Q-. 4. .  Can a qualified beneficiary who elects COBRA continuation coverage ever change from the coverage received by that individual immediately before the qualifying event?

(i) E is an employee who works for an employer that maintains several group health plans. Under the terms of the plans, if an employee chooses to cover any family members under a plan, all family members must be covered by the same plan and that plan must be the same as the plan covering the employee. Immediately before E’s termination of employment (for reasons other than gross misconduct), E is covered along with E’s spouse and children by a plan. The coverage under that plan will end as a result of the termination of employment.

(iii) COBRA continuation coverage is elected for each of the four family members. Three months after E’s termination of employment there is an open enrollment period during which similarly situated active employees are offered an opportunity to choose to be covered under a new plan or to add or eliminate family coverage.

(i) The facts are the same as in Example 1, except that E’s family members are not covered under E’s group health plan when E terminates employment.

(ii) Although the family members do not have to be given an opportunity to elect COBRA continuation coverage, E must be allowed to add them to E’s COBRA continuation coverage during the open enrollment period. This is true even though the family members are not, and cannot become, qualified beneficiaries (see Q&A-1 of §54.4980B-3).

(A) In general. The term “qualified beneficiary” means, with respect to a covered employee under a group health plan, any other individual who, on the day before the qualifying event for that employee, is a beneficiary under the plan—

(i) as the spouse of the covered employee, or

(ii) as the dependent child of the employee.

Such term shall also include a child who is born to or placed for adoption with the covered employee during the period of continuation coverage under this part [29 USC §§1161 et seq.].

Question 5: How much advance notice must the employer provide of the annual increase in the COBRA premium?

DoL Answer 5: The Staff acknowledges that neither the COBRA notice provisions in Part 6 of Title I of the Employee Retirement Income Security Act of 1974, as amended (ERISA) nor the DoL’s COBRA notice regulations (29 C.F.R. §§ 2590.606-1 through 2590.606-4) explicitly provide for advance notice of a COBRA premium increase. Nonetheless, Treasury regulations provide that if a COBRA premium payment is short by an amount that is insignificant, the qualified beneficiary must be provided notice of such underpayment and a reasonable amount of time to make the payment difference. See Treasury Regulation § 54.4980B-8, Question and Answer 5. Likewise, both the statute and Treasury regulations include provisions requiring equal coverage and, to some extent, equal treatment between COBRA qualified beneficiaries and same similarly situated non-COBRA beneficiaries. See ERISA § 602(1) and Treasury Regulation § 54.4980B- 5, Question and Answer 1. Accordingly, in the Staff’s view, COBRA continuation coverage should not be terminated for insufficient payment if COBRA qualified beneficiaries are not provided a reasonable advance notice of increased premiums and a reasonable opportunity to pay the increased premium.

An employee was a participant in the company’s group dental plan at termination of employment, but was not a participant in the company’s group medical plan. The employee elected to continue his dental coverage under COBRA. During the period of the employee’s dental COBRA continuation coverage, the company had open enrollment for employees. Can the former employee who is receiving dental continuation coverage under COBRA (and is a COBRA qualified beneficiary) elect coverage under the group medical plan during the open annual enrollment period?

Proposed response: The COBRA regulations provide in Treas. Reg. 54.4980B-5(iv) Q&A 4(c) that the same open enrollment period rights available to similarly situated active employees must be available to each qualified beneficiary receiving COBRA continuation coverage. Open enrollment period is defined as a period during which an employee covered under a plan can choose to be covered under another group health plan or under another benefit package within the same plan, or to add or eliminate coverage of family members. Therefore, the individual in the question could elect to participate in the group medical plan during the open annual enrollment period.

What are my benefits under Federal COBRA and Cal-COBRA?