Question: What is the HSA contribution limit for an employee who is enrolled in an HDHP for only a portion of the year?

Short Answer: The standard rule is that the employee will have a proportional contribution limit based on the months of HSA eligibility, but in certain circumstances, the last-month rule will allow the employee to contribute to the full statutory limit.

The general rule is that an individual must meet two requirements to be HSA-eligible (i.e., to be eligible to make or receive HSA contributions):

HSA eligibility also requires that the individual cannot be claimed as a tax dependent by someone else.

For more details on everything HSA, see our ABD 2020 Go All the Way With HSA Guide.

HSA contribution limits are based on the calendar year.  They are not related to the employer’s HDHP plan year.

The HSA contribution limits are adjusted annually for inflation, currently at the following levels:

For more details on the other HDHP/HSA annual limits, see our Compliance Alert: IRS Releases 2021 Inflation Adjusted Amounts for HSAs.

The IRS provides a useful chart and worksheet for determining your HSA contribution limit in the “Line 3 Limitation Chart and Worksheet” section of the Form 8889 Instructions.  This worksheet also incorporates the proportional catch-up contribution amount, as well as how changes from individual to family coverage affect the contribution limit.

Individuals who contribute in excess of the proportional limit will need to take a corrective distribution of the excess contributions by their tax filing deadline (generally April 15 without extension) to avoid a 6% excise tax on the excess contributions.  For more details, see our previous post Excess HSA Contributions, as well as slide 53 of our ABD 2020 Go All the Way With HSA Guide.

The Last-Month Rule: An Exception that Permits the Full Contribution Limit

Employees who enroll in the HDHP mid-year are generally subject to the proportional contribution limit above.  However, a special rule known as the “last-month rule” may apply to permit the mid-year enrollee to contribute up to the full statutory limit—even though the employee was not HSA-eligible for the full calendar year.

In order to qualify for the last-month rule, the employee must satisfy both of the following two conditions:

This creates a 13-month “testing period” that applies to determine whether the individual has met the last-month rule requirements.  The mid-year HDHP enrollee must be eligible on December 1 through the entire subsequent calendar year to contribute up to the full statutory limit (as opposed to the standard proportional limit) for the year in which the employee enrolled in the HDHP mid-year.

The IRS also provides a useful summary of the last-month rule in Publication 969 and the Form 8889 Instructions.

Mid-year HDHP enrollees who contribute to the statutory limit but do not satisfy the 13-month testing period by failing to remain HSA-eligible will be subject to income taxes and a 10% additional tax on the amounts contributed in excess of the statutory limit.  For more details, see slide 54 of our ABD 2020 Go All the Way With HSA Guide.

The HSA contribution limit is based on the calendar year—it is not based on the plan year of the employer’s HDHP.

The end result is that an employee’s HSA election will not create issues with the proportional HSA contribution limit because the prorated portion of the election contributed in each calendar year will not exceed the employee’s standard proportional limit.

(8) Increase in limit for individuals becoming eligible individuals after the beginning of the year.

(A)  In general. For purposes of computing the limitation under paragraph (1) for any taxable year, an individual who is an eligible individual during the last month of such taxable year shall be treated—

(i)  as having been an eligible individual during each of the months in such taxable year, and

(ii)  as having been enrolled, during each of the months such individual is treated as an eligible individual solely by reason of clause (i), in the same high deductible health plan in which the individual was enrolled for the last month of such taxable year.

(i)  In general. If, at any time during the testing period, the individual is not an eligible individual, then—

(II)  the tax imposed by this chapter for any taxable year on the individual shall be increased by 10 percent of the amount of such increase.

(iii)  Testing period. The term “testing period” means the period beginning with the last month of the taxable year referred to in subparagraph (A) and ending on the last day of the 12th month following such month.

If contributions were made to your HSA based on you being an eligible individual for the entire year under the last-month rule, you must remain an eligible individual during the testing period. For the last-month rule, the testing period begins with the last month of your tax year and ends on the last day of the 12th month following that month (for example, December 1, 2019, through December 31, 2020).

If you fail to remain an eligible individual during the testing period, for reasons other than death or becoming disabled, you will have to include in income the total contributions made to your HSA that wouldn’t have been made except for the last-month rule. You include this amount in your income in the year in which you fail to be an eligible individual. This amount is also subject to a 10% additional tax. The income and additional tax are calculated on Form 8889, Part III. 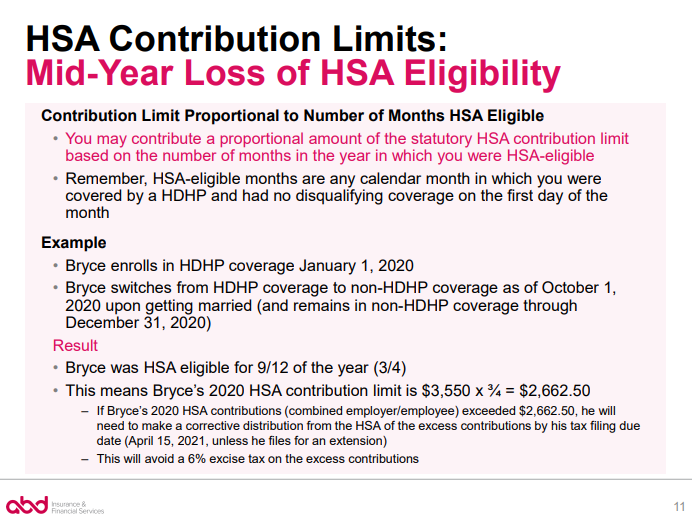 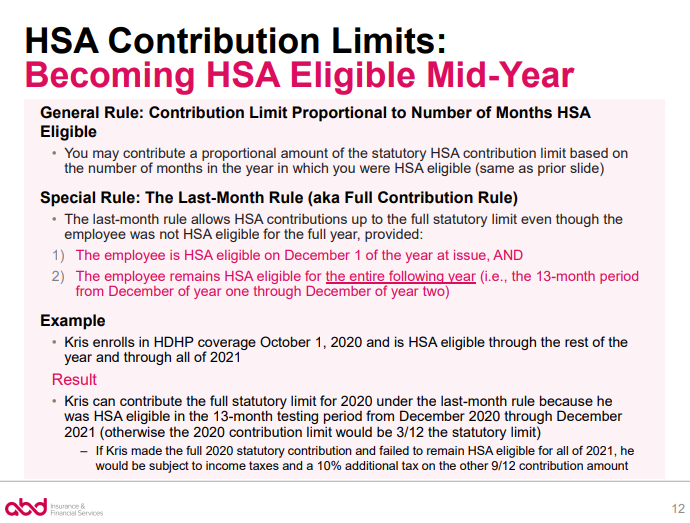